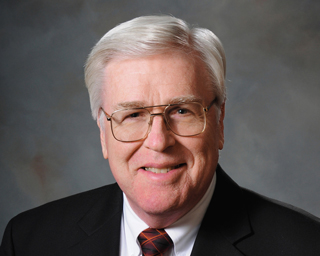 Bob Phares was first elected mayor of North Platte at the age of 28, which at the time made him the youngest person ever elected to run a Nebraska city of the first classification. He served two terms as mayor. He was president and owner of Phares Financial Services, Inc., a financial planning and insurance firm in North Platte. He is now semi-retired with his son, Brian, assuming the Presidents Role. Brian is the third generation to lead the firm.

Phares was born in Atlantic, Iowa and was raised in North Platte. He received his degree in business administration, graduating with honors in 1962 from Kearney State College, now the University of Nebraska at Kearney (UNK). He was honored for contributions to his alma mater in 1984 when he received the UNK Distinguished Service and Outstanding Alumni Award. He has also received Chartered Life Underwriter (CLU) and Chartered Financial Consultant (ChFC) designations from the American College, Bryn Mawr, Pennsylvania.

"Bob Phares has dedicated a lifetime of service to Nebraska, and I could not have asked for a more capable, qualified person to represent the best interests of western Nebraska residents and those of Nebraska's university," Gov. Heineman said when he appointed Bob to the board in 2006. "He has knowledge of the issues facing our towns, farms and ranches, and has earned a strong reputation from many years of engaged and active service at every level of civic leadership. This position provides an opportunity for Bob to bring his vast experience to bear in working with his fellow regents to chart a strong future for the University of Nebraska."