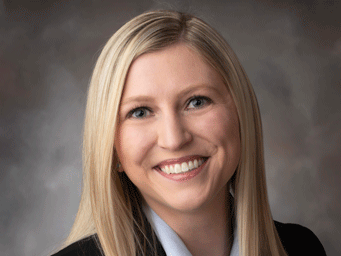 Elected to the Board of Regents 2018

Elizabeth O'Connor is currently serving as a Deputy County Attorney in the Civil Division of the Douglas County, Nebraska Attorneys Office. Prior to that she was a litigator in private practice.

Following her graduation from UNO, she attended Notre Dame Law School, graduating and passing the bar in 2015.

At Notre Dame, she was elected as Editor-in-Chief of the Notre Dame Journal of Legislation. She was also awarded the Dean's Award in her Intensive Trial Advocacy Class and served as a student attorney in a low income law clinic. She was also lucky enough to continue her relationship with another strong collegiate football tradition.

It was her time and opportunities at UNO that influenced her career decision as she served as Student Body President/Student Regent for UNO, Speaker of the Senate, Chi Omega Community Service Chair, and a member of the Omicron Delta Kappa honors society. Upon graduation, she was awarded the Sr. Vice Chancellor's Student Leadership Award, Outstanding Student in Arts and Sciences, and Outstanding Student in Political Science.

Her service as a student regent also influenced her decision to run for the Board of Regents. As a student regent, she saw first hand the important role the University played in the success of the state. She ran for the Board in 2018, because of her passion to make higher education affordable to all Nebraskans. She is committed to making education accessible, raising graduation rates, and continuing to prepare Nebraska's future workforce. She is excited about the University's role and contributions to the state and looks forward to its transformational impact in the future.