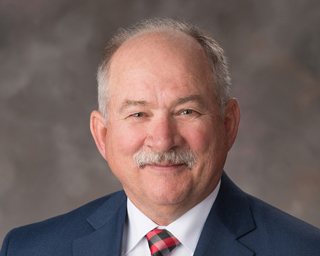 Paul Kenney is an agri-businessman, farmer and rancher from the Amherst, Nebraska area. He earned his degree in Agricultural Economics from the University of Nebraska Lincoln in 1982. Paul and Angie Kenney have four sons, two of which farm with Paul, three daughters-in-law and six grandchildren.

Paul Kenney’s farming operation is a homesteaded farm that has been passed-down through the family for over 100 years. Kenney serves as the chairman of KAAPA Ethanol, Chairman of the Nebraska Ethanol Board and as a member of Governor Pete Rickett’s Agricultural Advisory Committee.

Kenney has also served on the Amherst Public School Board for 16 years, is former President of Kearney Area Ag Producers Alliance, UNL Ag Alumni Board Member, Amherst Volunteer Fireman and past board member of Kearney Area Chamber of Commerce. In addition Kenney has served as a past council member of Prince of Peace Catholic Church and St. Johns Catholic Church, as past chairman of Gateway Farm Expo, is a graduate of the Nebraska Lead IX Program, was President of the Nebraska Agricultural Youth Institute, and has been honored as Farmer of the Year by the Kearney Kiwanis service club.