On behalf of the Board of Regents, I am pleased to present a KUDOS award to Edward Rau, Chief Electronics and Building Maintenance Specialist in the UNMC Eppley Institute and the Fred & Pamela Buffett Cancer Center.

Ed’s responsibilities include building maintenance, repair and maintenance of highly sensitive scientific equipment, and office and lab space moves. He also serves as the Eppley Institute liaison with UNMC Facilities and Maintenance. 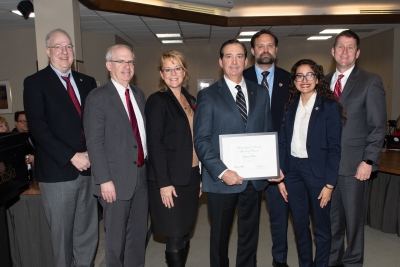 “This is a wide range of responsibilities and Ed does an outstanding job,” said one of his nominators, Matt Winfrey.

In each of his many nominations, Ed was praised for his crucial role in helping to move personnel into more than 70 laboratories in the Suzanne and Walter Scott Research Towers, which is part of the new Fred & Pamela Buffett Cancer Center. In addition to the labs, three core facilities and 10 common equipment rooms were moved during a 16-week period.

“The move was completed with minimal disruption to the critical research conducted in the Cancer Center’s scientific laboratories,” Mr. Winfrey said.

Ed supervises four staff members, implements training to increase efficiency and coverage when individuals are on leave, and strives to achieve quality and exceptional outcomes in all areas of his work. “Settling for average is not an option for Ed,” said Mr. Winfrey.

Mr. Winfrey also noted that Ed is very skilled in repairing laboratory equipment and often is able to make the repairs himself, instead of bringing in an outside vendor and incurring additional expenses. Because of his experience and expertise, they say, he has saved the institution hundreds of thousands of dollars over the course of his 30-year career in equipment repair costs and lost research time.

Another nominator, Dr. David Kelly, said “I know everybody’s common refrain when something goes wrong is, “Better call Ed!” In every case, he is pleasant, helpful, knowledgably, and, most importantly, reassuring that he will take care of things.”

Today, Ed is accompanied by his wife Karen Rau and his supervisor Matthew Winfrey. Please join me in thanking Ed for his considerable contributions and longtime service to the University of Nebraska Medical Center.