Through the new system-wide Teachers Scholars Academy, along with other teacher education programs on campus, UNL is helping to grow a diverse teaching workforce prepared to serve Nebraska children, families and communities.

The 40 students selected to serve as UNL’s inaugural Teachers Scholars Academy cohort began the program last fall. The academy allows them the opportunity to live and study together, conduct research and volunteer in the Lincoln community, among other activities to enrich their educational experience.

The Teachers Scholars Academy, made possible by a private gift from the William and Ruth Scott Family Foundation, aims to expose future teachers to Nebraska’s schools, communities and changing demographics through experiential learning. Teachers Scholars Academy cohorts are also underway at the University of Nebraska at Kearney and the University of Nebraska at Omaha. 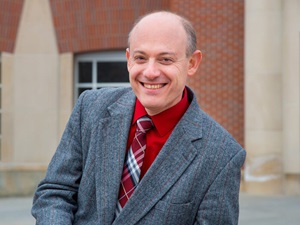 “The goal of the Teachers Scholars Academy is to grow this next generation of educators that will serve Nebraska and can even go beyond Nebraska,” Guy Trainin, chair of UNL’s Department of Teaching, Learning and Teacher Education, says in the podcast. “We’re really focused on this group of educators that would lead the next wave of education.”

With enrollment in Nebraska’s pre-K – 12 schools continuing to rise, to more than 367,000 today – and with the demographics of those students changing as well – the state faces a critical need for a strong pipeline of highly skilled, highly prepared future teachers. The University of Nebraska, the state’s largest producer of teachers, is focused on addressing the need.

“You never know what the future classroom will look like. We know what they look like now, but it’s always changing,” Braden Foreman, coordinator of UNL’s Teachers Scholars Academy, says in the podcast. “And that’s really exciting. I think what we’re doing is helping (academy students) be critical thinkers, which is a great way to help them be able to respond to that.”

The NU system’s “Leading Nebraska” podcast, launched last fall, shares stories of researchers, students and educators across the four campuses who are growing the state’s workforce and quality of life. New episodes of “Leading Nebraska” are released monthly and feature experts from UNL, UNO, UNK and the University of Nebraska Medical Center. Topics include nursing, agricultural education, counterterrorism, healthcare, workforce development, cybersecurity and others.