President Hank Bounds announced today that a series of initiatives developed by teams in the University of Nebraska-Lincoln’s Office of the Executive Vice Chancellor to build students’ understanding of diversity and inclusion has been selected to receive the inaugural President’s Inclusive Excellence Collaboration Award.

Bounds created the Inclusive Excellence Collaboration Award to honor sustained, outstanding contributions in diversity and inclusion between two or more University of Nebraska academic and/or administrative units or campuses. Honorees must demonstrate proven outcomes in advancing priorities like campus climate or recruitment and retention of students, faculty and staff.

Dr. Amy Goodburn, UNL’s senior associate vice chancellor and dean of undergraduate education, and the Office of Student Affairs, in partnership with more than 100 faculty, staff and students across campus, have led the development of the Husker Dialogues series and Inclusive Leadership Retreats, both aimed at building a climate in which all are valued. The initiatives have collectively engaged more than 9,000 of UNL students in conversations about diversity, inclusion, leadership, communication and other topics.

“It’s not enough to simply say that we value diversity. We have a responsibility as a university to make certain students have opportunities to sit next to, talk with, and learn from others who may not look or think like them,” Bounds said. “That’s how we’ll build the next generation of leaders who will live and work in an increasingly connected world.

“The Office of the Executive Vice Chancellor has been proactive, creative and collaborative in opening UNL students’ eyes to the world around them. The comments from students who have participated in the Husker Dialogues and Inclusive Leadership Retreats are clear evidence of the impact of these events. I commend Executive Vice Chancellor Donde Plowman and her teams for their efforts, and I’m proud to lift up their work to the entire University of Nebraska community.”

Launched in 2016, Husker Dialogues is an annual event for first-year students that facilitates conversations about promoting respect and understanding for different perspectives and identities in the UNL community, and introduces tools students can use in meaningful conversations about diversity and inclusion. The event is held in the third week of the fall semester and begins with remarks from students about their experiences on campus. Students then break into small groups for facilitated discussions about their own experiences.

Participation in Husker Dialogues has grown from 2,800 in 2016 to more than 3,400 last year, with some 90 percent of respondents reporting the event increased their awareness of diversity and modeled respectful ways to talk about related issues. Student feedback included comments like:

“While having these conversations, I realized that even if certain things are hard to talk about, we can still have productive conversations about them, as long as people are willing to listen and have an open mind.”

“I tend to look at a problem, be angry with it, and then hope that when I notice it again, someone will have fixed it. I need to stop overlooking these things.”

“I opened up about a lot of things that I’ve never really talked about out loud. It showed me how fun and liberating it can be to talk about diversity and embrace each other’s differences.”

Feedback also included the recommendation that students serve as facilitators for the small group discussions given that students may feel more comfortable discussing potentially difficult issues with their peers. In 2018, the event was adjusted accordingly. Additionally, students suggested that follow-up events be created to allow participants to delve more deeply into issues raised at Husker Dialogues and further develop their leadership skills. 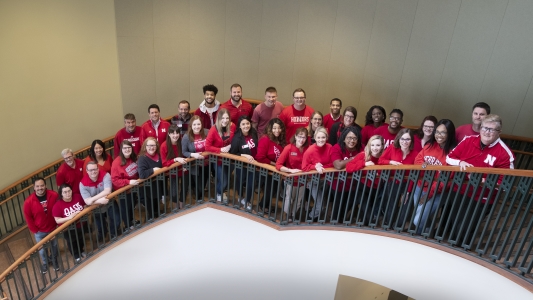 That led to the creation in spring 2018 of the Inclusive Leadership Retreats, daylong events designed to help students think more broadly about diversity issues and how to lead inclusively in the classroom, in the community and in their extracurricular activities. More than 100 students participated in the first Inclusive Leadership Retreat, with 150 additional participants in the fall.

Students reported greater awareness of their own unconscious biases and more confidence in their ability to discuss issues related to diversity and inclusion even when the topics are sensitive or uncomfortable.

Winners of the Inclusive Excellence Collaboration Award are selected by a committee representing the four NU campuses and the community. Honored units or campuses are awarded $25,000 to support diversity, access and inclusion efforts, like a conference, development of relevant curriculum, instructional materials, workshops, presentations or seminars.

Office of the Executive Vice Chancellor teams will be honored at a luncheon this spring hosted by Bounds and Executive Vice President and Provost Susan Fritz.