Get to Know Nebraska

Why a lot of young talent have chosen to come here to make their mark.

At its center is Hudl, a sports video software company that’s now on Fast Company’s list of 50 most-innovative companies of 2016. It’s been said that Hudl is changing the game for coaches and players. It’s certainly changing the landscape for other progressive startups that are inspired by its incredible success.

"The Raikes School, specifically Design Studio, was extremely valuable in helping us make the transition to running a company directly from college. We learned a lot about handling real-world projects, managing timelines and delivering for customers."

It might seem surprising that Hudl has decided to stay in Lincoln, the place where it was founded. Certainly the company has had its fair share of other cities—larger cities—trying to lure it away from the middle of the country. So why did Hudl decide to stay put when it could have picked up and moved to either coast?

The reason is simple: Nebraska’s expansive support system has helped Hudl become the company it is today. Couple that with a reasonable cost of operation, a burgeoning downtown, a family-friendly environment and the University’s backing—and it’s easy to see why Hudl is not packing its bags anytime soon. The company is certainly attracting talent from all across the country, and more importantly, keeping Nebraska talent from moving elsewhere. This has helped fuel Lincoln’s growth as new downtown residences, restaurants and nightlife begin to transform the once modest city, providing more reason as to why it’s become a destination. 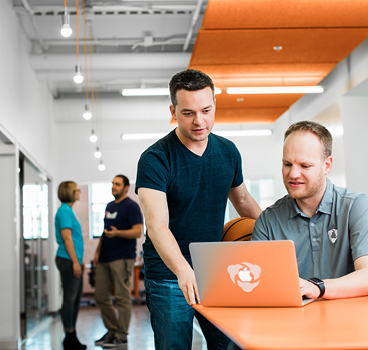 LEARNING TO RUN A COMPANY.

Hudl’s three founders, David Graff, Brian Kaiser and John Wirtz, met at the University of Nebraska–Lincoln’s Raikes School of Computer Science and Management. It was there that the three classmates, neighbors and friends started to work on the idea of Hudl. At the time, David had an internship at the University of Nebraska’s Sports Information Department where he saw the problems coaches were facing with the entire video process. Once he discussed what he’d observed with Brian and John, the three saw the potential to make a difference. Within a few months, they had a business plan and a solution for the coaching staff.

That’s the thing about Raikes—the students receive a top notch, well-rounded education that delivers relevant experience. It allows students to problem-solve, develop leadership skills, learn how to communicate and work in teams.

“The Raikes School, specifically Design Studio, was extremely valuable in helping us make the transition to running a company directly from college. We learned a lot about handling real-world projects, managing timelines and delivering for customers. Also, I think the connections were incredible, both through the alumni network and the Board of Advisors. There were a lot of people we were able to lean on for advice in getting a business together—people who’ve had a lot of success ,” said David.

A STRONG NETWORK WITHIN A TIGHT COMMUNITY.

A few of the people they were able to lean on became the company’s initial investors, helping it get off the ground. As it so happens, Hudl’s first paying client was the University of Nebraska’s football coaching staff.

Another turning point for Hudl—and for Nebraska—is the company’s planned headquarters, which will be a seven-story, 110-foot-tall building. It will be the second largest building downtown and a new home to more than 300 employees from across Nebraska and across the country. Thanks to companies like Hudl, the best and brightest are happy to call Nebraska their home