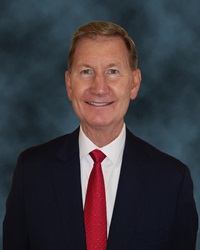 The Board of Regents today appointed Walter “Ted” Carter, Jr., VADM (Ret.), a higher education executive with an extensive record of growing student and academic success, as the priority candidate to serve as the eighth president of the University of Nebraska.

Carter, a retired vice admiral in the U.S. Navy, is the immediate past superintendent of his alma mater, the U.S. Naval Academy;  a former president of the U.S. Naval War College; and a Distinguished Flying Cross and Bronze Star recipient. He was unanimously supported by both the Board and the 23-member Presidential Search Advisory Committee that represented faculty, students, staff, business, agriculture and other university constituencies.

His achievements in six total years as a university president include record highs in graduation rates and student diversity, improvements in the student experience, top national rankings, and success in fundraising and engagement with elected leaders.

Carter immediately begins a 30-day public review period that will include forums across the state where Nebraskans will have the opportunity to meet him, ask questions and provide feedback. Details on the public events will be announced soon. After the conclusion of the 30-day period, if the Board deems appropriate, the Board would vote on Carter’s appointment as the university’s president-elect.

“The search committee began this process with a tall order in front of us: Find a president who could build on the University of Nebraska’s incredible momentum and lead us into our next chapter of growth. In Ted Carter, we found that person,” said Regent Jim Pillen of Columbus, who chaired the national search that began in April.

“Ted’s character and integrity are second to none. He has a proven focus on the success and well-being of students, faculty and staff. He has a deep appreciation for the role and mission of higher education. And he is a public servant in every sense of the word. I’m pinching myself that we have an opportunity to bring someone with Ted’s credentials and caliber to the University of Nebraska. We can’t wait to introduce him and his wife Lynda to the people of our state.”

Pillen and Board of Regents Chairman Tim Clare of Lincoln thanked Dr. Susan Fritz, who has served as interim president since President Emeritus Hank Bounds stepped down in August. Under Fritz, the university has continued its focus on the success of its 51,000 students and is working across sectors to grow a skilled workforce for Nebraska.

“Ted Carter is a skilled, smart, strategic leader with impeccable ethics and integrity. He brings the experience and relationships necessary to lead the University of Nebraska forward and take it to even greater heights,” Clare said.

“On behalf of the Board, I want to thank the hundreds of Nebraskans who have participated in the search process over the past few months, especially the faculty, students, staff and community members on the Presidential Search Advisory Committee who have given so generously of their time and ideas. I could not be more excited about where we’re headed.”

Carter said: “When I left the Naval Academy in July, I said that the role had been the highest calling of my life. Then I saw that the University of Nebraska was looking for its next president. The more I learned about the university, the more I read about the remarkable work of its faculty and students, the more convinced Lynda and I became that we had found our next calling.

“The University of Nebraska has a rich history of serving the needs of the state, and an opportunity to do even more in the future. I am humbled by the confidence of the search committee and Board of Regents, and I look forward to a conversation with Nebraskans about how we can make a difference for the next generation of students.”

Carter, 60, served as superintendent of the U.S. Naval Academy in Annapolis, Md., from 2014 to 2019, the longest continuously serving superintendent in Annapolis by special request of the Secretary of the Navy and the Chief of Naval Operations. As superintendent – the Naval Academy’s equivalent of a university president – Carter oversaw all functions of the institution, including leadership of 4,400 students and 1,500 faculty and staff, management of a $500 million budget, and oversight of academics, facilities, admissions and policy.

The Naval Academy’s Class of 2019 achieved a record-high graduation rate of 90 percent, and the academy leads the nation in yield, with more than 88 percent of prospective freshmen accepting an offer to attend. Carter also significantly advanced diversity and inclusion at the Naval Academy; of the Class of 2023, 28 percent are women and 40 percent are ethnic minorities, meaning white men are no longer the majority for the first time in the academy’s 173-year history.

Carter also formed the nation’s first accredited cyber operations major and accredited a nuclear engineering major at the Naval Academy. During his tenure, the academy was ranked the nation’s No. 1 public university by Forbes Magazine.

Prior to that role, Carter was president of the U.S. Naval War College in Newport, R.I., where he led 1,600 resident students, 100,000-plus distance education students and 600 faculty and staff in graduate-level education.

Carter was a successful fundraiser in both roles, working with his foundations to raise a total of $400 million in philanthropic support for academic programs. He also worked with Congress to direct $120 million toward a new cyber operations building at the Naval Academy; the building will be named after Rear Admiral Grace Hopper, the first at any service academy to be named for a woman. Carter has extensive experience briefing members of Congress and has shared the stage at speaking events with Presidents Trump and Carter and Vice Presidents Pence, Biden and Cheney.

He also authored the document that changed the Navy’s approach to suicide and sought to reduce stigmas around mental health issues. Suicide rates dropped by 25 percent a year after the steps outlined in Carter’s document were implemented.

The Naval Academy offers 33 Division I athletic programs and in 2018 enjoyed a record-high 69 percent winning percentage across all sports. While a student at the Naval Academy, Carter played ice hockey for all four years and served as team captain. He has run eight marathons, including the Boston Marathon twice.

Carter also brings extensive military service, having graduated from the Navy Fighter Weapons School (Top Gun) in Miramar, Calif., in 1985. He was commander for the Carrier Strike Group Twelve, in which he commanded 20 ships, two nuclear-powered aircraft carriers and two carrier air wings that were deployed to Afghanistan and the Arabian Gulf. He is a naval flight officer with more than 6,300 flying hours, and has completed 2,016 carrier-arrested landings, an American record.

Carter earned his bachelor’s degree in physics and oceanography from the U.S. Naval Academy. He also has educational credentials from the 18-month-long Navy Nuclear Power School, the U.S. Air Force Air War College, the Naval War College and the Armed Forces Staff College.

Carter, the son of an English teacher, was raised in Burrillville, R.I., a rural, one-high school town in the northwest corner of the state where he became an accomplished clarinetist and baritone saxophone player. He and his wife, Lynda, currently reside in Suffolk, Va., and have two adult children.