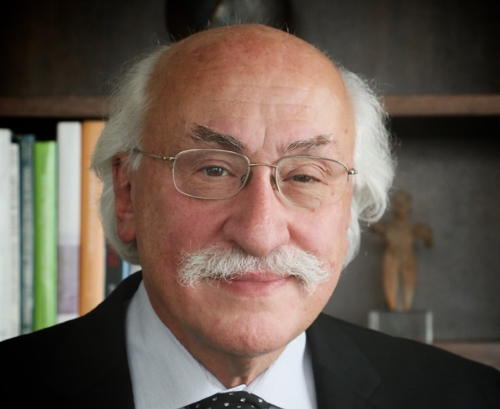 A gift from the Holland Foundation to the University of Nebraska honors Richard “Dick” Holland’s legacy and strengthens the Buffett Early Childhood Institute’s efforts to deepen public understanding and awareness about the importance of the earliest years of life.

The $2 million gift establishes the Richard D. Holland Presidential Chair in Early Childhood Development as a permanently endowed fund at the University of Nebraska Foundation. The presidential chair, which represents the highest academic award and recognition the university can bestow on a faculty member, will be held by Samuel J. Meisels, one of the nation’s most accomplished and respected early childhood leaders and founding executive director of the Buffett Institute.

The Institute, which began operations in 2013, focuses on using research to expand and strengthen early care and education, especially for children in greatest need. By applying the best of what is known about the science and practice of high-quality early experiences, the Institute seeks to make a lasting difference in young children’s lives.

Dick Holland, a highly respected community leader and philanthropist who passed away on August 9, 2016, shared this vision. For decades, he and his wife, Mary, were deeply involved in numerous philanthropic efforts in his native Omaha benefiting children, education, the arts, medicine, and the environment.

“We are very grateful to the Holland family for their generosity and their trust in the University of Nebraska and the Buffett Early Childhood Institute,” said NU President Hank Bounds. “The creation of the Richard D. Holland Presidential Chair in Early Childhood Development is a fitting tribute to Dick—a true champion for children and families—and sends a clear signal across Nebraska and the nation about our deep commitment to early care and education.”

The establishment of the Holland Presidential Chair is deeply personal for Meisels.

“Dick was a visionary leader, a true humanitarian, and a dear friend,” Meisels said. “His passion for creating opportunities for all children was inspiring. His philanthropy changed Omaha, our state, and the University of Nebraska for the better. It is an honor to continue working in his name on behalf of the children, families, and communities he cared about so much.”

Annual income from the Holland endowment will be made available to the Holland Presidential Chair to help with the Buffett Institute’s public outreach and education efforts in support of high-quality learning and development for young children. The Institute will focus increasingly on this area in the years to come, Meisels said, and intends to launch a series of strategic communications and policy initiatives across the state and nation.

In addition to this gift, the Holland Foundation has actively supported the Institute’s early childhood workforce planning and development program.

“Dick and I spoke many times about how Nebraska is on the verge of becoming a national leader in creating innovative early childhood programs that truly make a difference for children and families,” Meisels said. “We shared the view that to realize the promise of making Nebraska the best place in the nation to be a baby, we must focus on public outreach and policy development in support of this continued progress for young children.”

Support for the Buffett Early Childhood Institute’s work is only one example of the Holland family’s commitment to creating opportunities for disadvantaged children. The Hollands were among the principal supporters of such initiatives as the Child Saving Institute, Completely Kids, Partnership 4 Kids, and the NorthStar Foundation.

“My dad cared passionately that everyone should be treated fairly and equally,” said Mary Ann (Andy) Holland, Dick’s daughter and president of the Holland Foundation. “He identified early childhood development and education as critical to achieving a successful, happy life. He loved Dr. Meisels and the Buffett Early Childhood Institute. He would be so pleased about this Presidential Chair in his honor.”