University of Nebraska President Hank Bounds today announced the 2019 winners of the university’s most prestigious faculty awards for teaching, research and engagement.

The university-wide President’s Excellence Awards recognize faculty whose work has had a significant impact on students, the university and the state.

“Fundamentally, the University of Nebraska exists to change lives. Our faculty, who are among the best in the world at what they do, carry out that mission in classrooms, labs and fields every day,” Bounds said. “It is a great privilege to serve among such talented and dedicated colleagues. I thank them for all they do on behalf of our 52,000 students and the state, and I join members of the university community and all Nebraskans in congratulating them on their important work and far-reaching impact.”

“I join members of the university community and all Nebraskans in congratulating these faculty on their important work and far-reaching impact.” Hank Bounds, President
University of Nebraska

Winners – who are selected by a university-wide committee of faculty members and, in the case of the engagement award, community members – receive $10,000 each, a presidential medallion and an engraved plaque. Awards will be presented at a luncheon hosted by Bounds this spring. 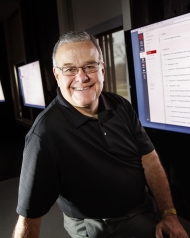 Lloyd Bell, Ph.D., professor in the Department of Agricultural Leadership, Education and Communication at the University of Nebraska-Lincoln. Bell, a Nebraska native, began his career as an instructor of vocational agriculture in West Point and Blair, and has been a faculty member in the College of Agricultural Sciences & Natural Resources (CASNR) since 1979. He has taught extensively in the undergraduate teacher preparation program of his department and has been instrumental in the delivery of professional development opportunities for Nebraska secondary educators of career and technical education. Bell’s scholarly activity and research interests are dedicated to researching theory and best practice, the promotion of the teaching and learning process within agriculture, and facilitating a nurturing atmosphere of interaction and thought. Bell has received numerous teaching awards within CASNR and has been widely recognized by the North Central Region of the American Association for Agricultural Education (AAAE). In 2012 Bell was named a Senior Fellow in AAAE, recognizing his exceptional and sustained contributions to the agricultural education profession. 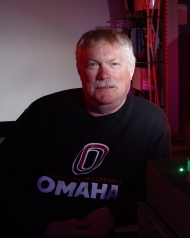 William Mahoney, Ph.D., associate professor in the School of Interdisciplinary Informatics and graduate program chair in the cybersecurity degree program at the University of Nebraska at Omaha. Mahoney, the recipient of numerous UNO teaching awards, was a longtime adjunct faculty member for the computer science department before joining UNO full-time in 2005. He created the master’s degree in cybersecurity for UNO, and is the recipient of several scholarship awards which were used to recruit students into the program. Two of these, the NSF Scholarship for Service grants, have provided UNO with $3.9 million to fund cybersecurity students who then enter the workforce for federal, state, tribal or local government agencies. Mahoney has created new courses to support the master’s degree program which have helped UNO earn a Center of Academic Excellence—Cyber Operations designation from the National Security Agency, placing UNO in the company of only 19 other universities in the United States. Mahoney has supervised 42 independent studies, served on 44 thesis or dissertation committees, and is the faculty representative for NULLify, the UNO student cybersecurity club. 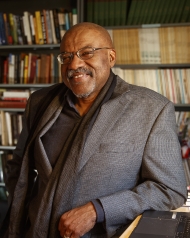 Kwame Dawes, Ph.D., Chancellor’s Professor of English and Glenna Luschei Editor of Prairie Schooner in the Department of English at the University of Nebraska-Lincoln. Born in Ghana, Dawes spent most of his childhood and early adult life in Jamaica. He is the author of 21 books of poetry and numerous books of fiction, criticism and essays. His most recent collection of poems is City of Bones: A Testament (2017). His other books include Speak from Here to There (2016), a collection of poems co-written with Australian poet John Kinsella, and Bob Marley: Lyrical Genius (2007), which remains the most authoritative study of the lyrics of Bob Marley. Dawes is director of the African Poetry Book Fund and artistic director of the Calabash International Literary Festival. Dawes’s awards include an Emmy and Webby for LiveHopeLove, an interactive website based on his project HOPE: Living and Loving with AIDS in Jamaica. His numerous other honors include the Forward Prize for Poetry, several Pushcart Prizes, a Guggenheim fellowship and the prestigious Windham/Campbell Prize for Poetry. 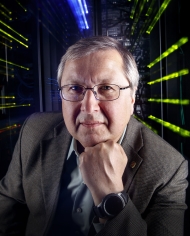 Evgeny Tsymbal, Ph.D., George Holmes University Distinguished Professor of Physics at the University of Nebraska-Lincoln. Tsymbal’s research is focused on computational materials science aimed at the understanding of fundamental properties of advanced ferromagnetic and ferroelectric nanostructures and materials relevant to nanoelectronics and spintronics – research fields that promise to revolutionize electronic and data storage industries. Since 2007, Tsymbal has been the director of the National Science Foundation-sponsored Nebraska Materials Research Science and Engineering Center (MRSEC) “Polarization and Spin Phenomena in Nanoferroic Structures,” which involves 26 faculty members from six UNL departments. Tsymbal has also been founding director of the Center for Nanoferroic Devices, charged with developing non-conventional electronic devices that can scale computer technologies. Since coming to UNL in 2002, Tsymbal has secured more than $32 million as a principle investigator. He has also published more than 240 papers, review articles and book chapters, has served as the specialty chief editor for Frontiers in Condensed Matter Physics, and is a fellow of the American Physical Society and the Institute of Physics. 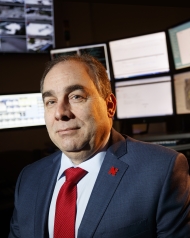 Mario Scalora, Ph.D., director of the University of Nebraska Public Policy Center and professor of psychology at the University of Nebraska-Lincoln. Scalora supervises research on a range of areas such as threat assessment, stalking, extremist violence, school violence and workplace violence. In collaboration with his colleagues, Scalora’s research activity focuses on increasing public safety and violence prevention at the individual, institutional and community levels. This behavioral science approach to threat assessment involves teaming with human service, educational, law enforcement and public safety professionals to prevent violence. Over the course of his career, Scalora has focused on advancing the research and development of threat assessment methods and translating these into real-world training to increase public safety and awareness of threat risks. His research has evolved into a nationally recognized assessment strategy used by a wide array of educational, law enforcement, public safety, and industrial security professionals. In training thousands of professionals in assessing and managing threats at the local, state and national levels, Scalora and his colleagues have also provided a valuable workforce development pipeline of clinician trainees.