The University of Nebraska Board of Regents made history today by naming Susan M. Fritz, Ph.D., a 30-year veteran of NU who has served as executive vice president and provost since 2012, as interim president-elect. Fritz will become the first woman to lead the university since the system office was created 51 years ago. 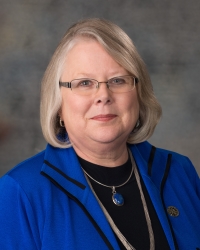 Fritz, a Nebraska native, first-generation college student, three-time NU alum and faculty member with decades of progressive leadership experience, will assume the title of interim president on Aug. 15, following the departure of current President Hank Bounds. She will remain in the role until the Board completes its national search for the next president and her successor is in place.

“In considering our interim leadership, the Board of Regents had a clear priority: Select the best possible person to carry forward the University of Nebraska’s momentum in providing affordable, accessible, outstanding education for our 52,000 students and the people of Nebraska,” Board of Regents Chairman Tim Clare said. “Dr. Susan Fritz is that leader. Susan knows this university inside and out, and she has a deep appreciation for and connection to our teaching, research and outreach missions, particularly in agriculture. Most importantly, she makes every decision with our students’ interests in mind.

“At a time when the needs of our state and workforce are too great for us to press pause, I have complete confidence that Dr. Fritz will lead us to continued success through this period of transition. That we are making history with her appointment is an added and extraordinary honor.”

Fritz said: “It is the privilege of a lifetime to be entrusted with this role by the Board of Regents. I know from personal experience that the University of Nebraska is a powerful force for change and growth for young people and communities alike. To have the opportunity to serve the university in this way, at a time of such great opportunity, is beyond what I would have thought possible.

“I look forward to working closely with the Board, our chancellors, vice presidents, and incredible faculty, staff and 52,000 students – along with our elected leaders, philanthropic partners, farmers and ranchers, and business leaders – to move the University of Nebraska forward.”

Fritz was raised on her family’s farm outside Lincoln, where the family raised beef and cattle and grew row crops. She continues to farm today; with her husband, Russell, she co-owns and co-operates Fritz Family Farms in Crete, where the couple grow corn, soybeans and alfalfa and run a cow/calf operation. The Fritzes have three children and seven grandchildren.

Fritz earned her bachelor’s degree in business administration, master’s in adult education and agricultural education, and doctorate in community and human resources, all from the University of Nebraska-Lincoln.

Fritz became interim dean and director of UNL’s Agricultural Research Division and the Nebraska Agricultural Experiment Station in 2009. In that role, she led the team that negotiated a wheat breeding partnership with Bayer Crop Science that vaulted UNL into the nation’s top 20 universities in technology transfer revenue.

Fritz joined NU’s Central Administration office in 2011 as associate vice president for academic affairs. She became interim executive vice president and provost and dean of the graduate college in 2012 and assumed the permanent role two years later. As provost, Fritz is the university’s ranking academic officer, responsible for oversight of the system’s teaching, research and service activities as well as NU’s offices of institutional research, global engagement, and diversity and inclusion. Fritz also oversees University of Nebraska Online, which provides access to 100-plus online programs, and the Nebraska Student Information System, a partnership between NU and the Nebraska State College System.

Bounds is stepping down after four years at the helm that have seen record growth in enrollment, research and student success, along with increased collaboration and efficiency among campuses.

“Susan Fritz has been a trusted partner, advisor and friend over the past four years. The University of Nebraska could not be in better hands,” Bounds said. “I commend the Board of Regents on this historic appointment, and I congratulate Susan on this well-deserved new role. I look forward to seeing what the university will accomplish in the future.”

By mutual agreement with the Board, Fritz will not be a candidate for the permanent presidency.