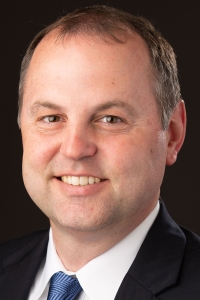 Blackman, who currently serves as NU associate vice president for information technology and chief information officer at the University of Nebraska at Omaha, will assume his new role on July 1, pending Board of Regents approval. He will continue to hold the CIO title at UNO.

Blackman brings two decades of progressive leadership experience in IT, having begun at UNO, his alma mater, in 1999 as a technology coordinator. As associate vice president, Blackman has played a key leadership role in the reorganization of IT divisions at UNL, UNO, UNK and Central Administration to better serve the university’s IT needs and reduce operational costs. The effort has saved $6 million and resulted in a newly unified “OneIT” organization that maximizes service and efficiencies across the NU system.

“Bret is a visionary, collaborative and thoughtful leader who will bring the experience and relationships we need to the chief information officer role,” Bounds said. “We’ve built a great deal of momentum in IT thanks to Bret’s leadership and the strategic vision of Mark Askren. We can’t miss a beat. Information technology is increasingly important to the success of the University of Nebraska, and I’m thrilled that we have someone with Bret’s talent to pick up where Mark will leave off.”

“Information technology is increasingly important to the success of the University of Nebraska, and I’m thrilled that we have someone with Bret Blackman’s talent to pick up where Mark Askren will leave off.” President Hank Bounds

Reporting to the president, the vice president and CIO leads a team of more than 300 staff and an annual operating budget of more than $50 million. As a member of the Executive Cabinet, the CIO works closely with the chief academic, business and legal officers, as well as the campus chancellors and CIOs, on strategic information technology initiatives to serve the university community. The CIO is responsible for the security of faculty, staff and student data; the maintenance of critical infrastructure; and ensuring the highest-quality customer service for the diverse IT needs of NU stakeholders.

“I’m humbled to be able to serve my alma mater in this role,” Blackman said. “The IT professionals at the University of Nebraska are some of the best in the business. They come to work every day knowing that what they do has a direct impact on the success of our University of Nebraska students, faculty and staff. They know how to turn challenge into opportunity, and they do it all with an eye for making the best possible use of every dollar we spend.

“I thank President Bounds, Provost Fritz, and Vice President and CIO Askren for this opportunity, and I look forward to working with our many partners to build the University of Nebraska as a national leader in information technology.”

Blackman earned his bachelor’s degree from UNO in management information systems and is pursuing a UNO master’s degree in critical and creative thinking with a concentration in organizational science and leadership. He was the NU technical lead for the statewide Nebraska Student Information System product selection process and UNO’s lead for implementation. He co-led UNO’s first campus-wide website strategy and led implementation of the campus’ first Customer Relationship Management system for student recruitment. He was the primary point of contact for U.S. Secret Service IT security needs when then-President Barack Obama visited UNO in 2016.

Blackman serves on the Board of Education for the Red Oak, Iowa, Community School District and has coached youth football, basketball and baseball. He and his wife, Brandi, are the parents of 15-year-old twins Ashlyn and Nolan, and 9-year-old daughter Ella.

Askren, NU vice president and chief information officer since 2016 and CIO at the University of Nebraska-Lincoln for the past decade, announced in January his plans to step down. He will transition to the role of senior advisor to the president on July 1, and will retain his UNL CIO duties until the fall. UNL plans to begin a search for a new CIO soon.